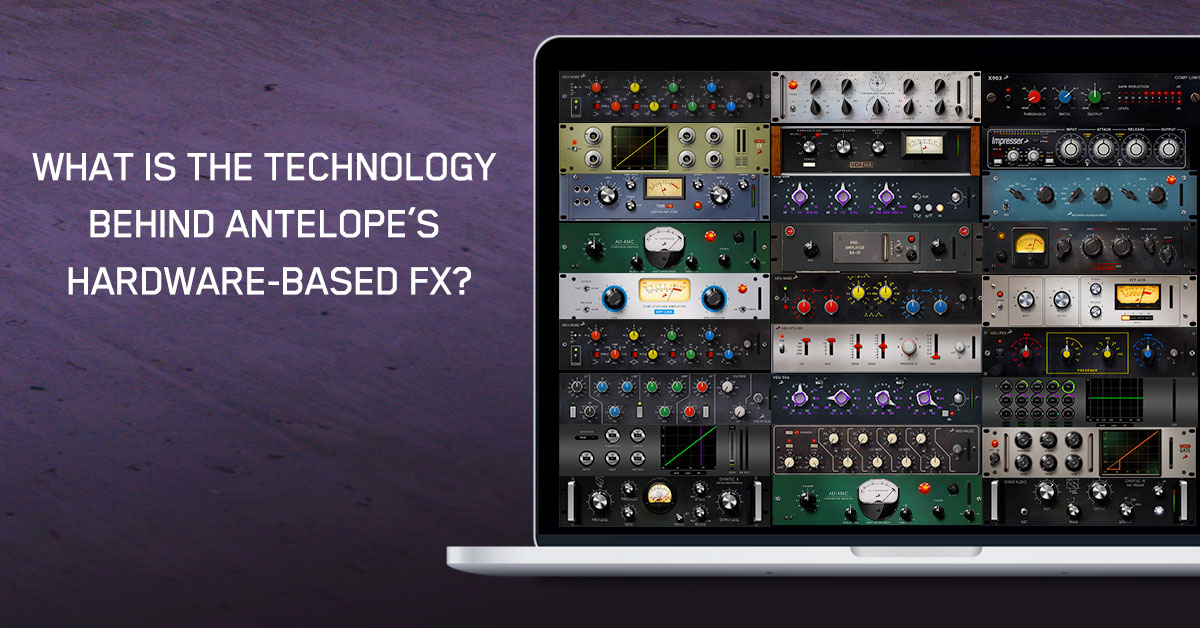 What is the Technology Behind Antelope’s Hardware-based FX?

By Antelope AudioJanuary 17, 2020 No Comments

What is the Technology Behind Antelope’s Hardware-based FX?

What is the reason our authentic digital emulations sound the way they do? At Antelope we tend to turn our attention to technology and how it is implemented in audio. Being the first to recognize the potential in FPGA processors’ massive parallel computation abilities for digital audio effects, we take pride in how our effects are developed. Recently, we had producers Ricky Damian and Jason O’Bryan put the Antelope hardware-based FX to impressive use in their studios. Now it’s time to take a closer look at the technology behind our effects.

Whereas traditional processors like DSPs or computer CPUs use a set of instructions pre-programmed by the manufacturer, FPGAs are more like integrated circuits programmed by the user to execute logical operations.

The processor is dynamically reconfigured in groups of programmable logic gates, memory, or other elements to become what you want it to be. A compressor. An EQ. A reverb. Why not all of the above, simultaneously? Instead of describing a circuit in a programming language, we are running the literal circuit on the processor itself, recreating the components and their characteristic non-linear behavior. Often several circuits are running at once, each with its dedicated processor array, in real time. That’s the unique parallel computing power of an FPGA, harnessed for making incredible-sounding records in-the-box.

The addition of modern, ARM-based DSPs expands the FX processing capabilities of FPGAs with new types of effects which lend themselves better to DSP development than FPGA’s hardware-oriented paradigms. An example of this are creative and modulation effects like delays and flangers, or the fabled Opto-2A compressor whose unique architecture is more efficiently replicated in DSP.

Contributing a significant boost in computing power, cutting-edge ARM processors work in synergy with custom FPGAs to form Synergy Core – an FX and signal processing platform with truly unlimited potential. Synergy Core’s modular design allows us to configure and scale the platform according to the strengths and use cases unique to each product and is fully future-proof.

Instead of burdening you with processor specifications, clock rates, and so on, we’d rather show you the FX counts of the Discrete 4, Discrete 8 and Orion Studio Synergy Core interfaces:

Discrete 4 Synergy Core (2x DSP + 1x FPGA) – up to 4 FX channel strips of 8 FX slots each for a maximum of 32 FX instances at sample rates up to 192kHz and no perceived latency.

Discrete 8 Synergy Core (2x DSP + 1x FPGA) – up to 8 FX channel strips of 8 FX slots each for a maximum of 64 FX instances at sample rates up to 192kHz and no perceived latency.

Orion Studio Synergy Core (6x DSP + 2x FPGA) – up to 32 FX channel strips of 8 FX slots each for a maximum of 256 FX instances at sample rates up to 192kHz and no perceived latency.

The Synergy Core FX can be used like traditional plug-ins inside your favorite DAW with the AFX2DAW bridge plug-in. It takes advantage of fast Thunderbolt™ connectivity and Synergy Core’s bespoke processing to deliver the same results with a more immediate workflow. All audio I/O and FX processing is handled by the audio interface, with only a miniscule amount of CPU taken for visualizing the effects’ input and output meters. These can be turned off to completely eliminate the use of CPU power for processing audio effects.