By Antelope StaffApril 4, 2022 No Comments

“Reamping does not mean amping again!”

One of the main goals in modern recording is to capture a pristine and dry signal from a source. In fact, these days it’s very common not to commit ANY processing to tape or hard drive, so everything can be adjusted during the mixing stage.

Electric guitars are something of an exception to this, as a ton of processing often happens through stomp boxes and the amplifier, recorded via a microphone. This makes sense, because more than with any other instrument these are integral to the signature sound which the guitarist probably spent ages getting just right. However, this has the drawback of not allowing any creative decisions later on, and limits sculpting of dynamics and frequency spectrum as one would with other sources.

Enter reamping! In this case, the clean signal is actually recorded, and the processing (amp and effects) is added later.

The typical reamping scenario consists of two phases. First, you route a guitar directly to your interface, and also to the player’s amp so they can hear their usual sound. After the recording session, you play back the guitar recording into stomp boxes and amplifier which you then capture via a microphone.

The benefit is that you can freely adjust settings, swap amps, and try out different microphone models and positions without using up all of the player’s valuable time and energy. Not only that, but you can change the whole configuration for each song, or even for a particular section of a song!

Recording first and tweaking later, you’ll make sure you get a fresh performance from the talent – which in the end is still the most important ingredient, and a key responsibility of the producer or engineer.

The how is easy. You put an active DI box after the guitar, which lets the signal pass through unchanged, but also splits off a version that you can route to your interface. For the actual reamping, you need a dedicated reamping box or a reamp output as you might find on for instance the Zen Tour or Discrete 8 Pro interfaces. Simply using a line output would not work as this does not have the impedance and level required by an amplifier input. In case you are recording an amplifier, you will need a microphone input to capture the sound. For stomp box processing only, you would record the processed sound via DI again.

While recording, the signal also still goes to the amp and effects unaltered, so that the player and band hears the sound they’re used to. You might as well put a mic in front and record this, too! Even if you don’t end up using this sound, it will give those in the control room (or playing along on headphones) a much better impression of what the music will eventually be. It also allows you to play back a more realistic sounding track immediately after recording.

You can put some pedals before the DI box, too. While this means you cannot adjust these effects post-performance, it would be a shame to lose for instance the movements of a wah or volume pedal, which are an integral part of the performance.

Finally, as the feedback of an overdriven amplifier close to the electric guitar makes the notes sustain, you will still have those preserved notes in the clean recording. This would not be the case when just recording the signal directly without real amplification.

It all starts with a great performance. But even the best takes sometimes have imperfections that you’d rather replace or edit. Especially with some sort of distortion, the wrong note can result in very nasty artefacts which are almost impossible to carve out. Here reamping comes to the rescue once again, because the clean signal is a lot more forgiving to digital adjustments, which in turn will sound very natural once they are run through the amp and effects.

From a redundancy point of view, if either of the tracks – clean or amped – has an issue like hum or clipping, you still have the other one.

As with everything, now that you’ve learned the rules you can break them! There is no reason why you should only reamp guitars, in traditional guitar-centric genres. You can send any vocal, drum, synth, … track through those pedals and amps now, and see what it sounds like. You might get just the right sound, or more likely a cool interlude or a grungy “doubling” to play in parallel with the original track.

Conversely, you can run tracks through just stomp boxes or anything else that takes “instrument level” inputs. In this way, you get to add a ton of quirky outboard equipment to your arsenal, especially if you or your friends have a lot of effects lying around.

So far we’ve been focusing on getting the amp and effects just right after the fact. But just as important, and maybe even more, is the effect of the room on the resulting sound. You might record a guitar in a bedroom setting and then go to a fantastic sounding space, be it in an expensive recording studio, famous concert hall, or empty swimming pool (you would not be the first to try it!). The microphone position, distance from the floor and walls, carpet, … it all makes a difference.

The same reamping rules apply to digital emulations of amps and stomp boxes. Bedroom guitarists plugging directly into an interface with built-in hardware processing can hear themselves with amp and stomp box on the monitor path, while recording the clean signal. Here again, the processed sound can be recorded too for convenience and efficiency, but having the clean sound allows for reamping with the perfect signal chain and settings at a later point in time.

Taking this one step further, the clean signal can also be processed by software or hardware emulations, which are often very close to the real thing and in some contexts will work even better. It removes the need for a room with nice acoustics, a reamp box, or indeed a good amp and stomp boxes. Between either extreme you also have the hybrid option of applying digital processing to the recorded signal before or after analog reamping.

In a way, reamping is for guitar what recording MIDI is for keyboard. In the case of a MIDI-equipped synth or digital piano, recording both the audio and the MIDI outs reserves the option to make subtle tweaks, select an entirely new patch, or even swap the synthesizer. Here too, the original audio is still necessary for the player to hear themselves, for the band and engineer to monitor, and to have a rough mix from the start. But at least you can worry about crafting that perfect setting later and just start recording.

Now that you understand the basics, go forth and surprise yourselves! Reamping has so many applications, we bet you come up with something we haven’t even thought of. 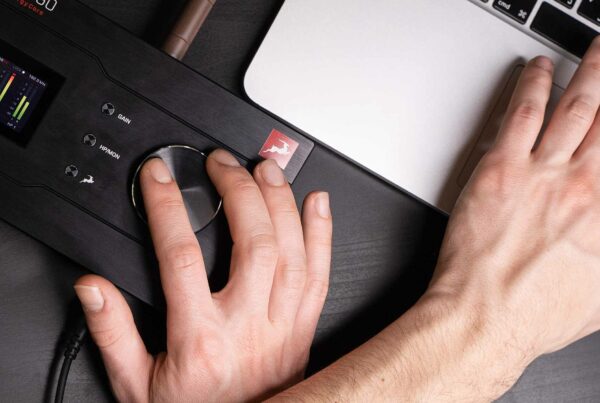 How to use an audio interface?