By Antelope AudioMarch 5, 2021 No Comments

How to Record at Home, Multitrack and Stream with a Desktop Audio Interface

Gaining experience and knowledge is undeniably the most important thing when recording music. Bigger projects, more artists, different locations – this is the best way to develop skills and any YouTube tutorial is no substitute for that. For those creating music at home, this can be a daunting task since space and equipment can be limited. There is some magic when recording a whole band at the same time, instead of each instrument one by one – since it’s closer to a live performance, the chemistry between the musicians can still be felt in the performance. To do this you need an audio interface with a channel count that is sufficient for the purpose. The Discrete 4 Synergy Core offers inputs and outputs rarely found in devices with such a compact form factor. This gives its users irreplaceable flexibility that fits many different recording scenarios – at home, in the studio, or on-location.

In the first scenario, we utilize the main connectivity options that the interface provides – the four discrete console-grade preamps, and the four independent headphone outputs. Say we have a three-person band featuring a vocal lead, electric guitar player, and an acoustic guitarist. Once connected, the microphones and the electric guitar are plugged into the inputs, the engineer can utilize the headphone outputs to create four independent low-latency cue mixes and send them directly to the artists. Lay Auto-Tune on the vocal, guitar amp effect on the electric guitar, console strip compressor on the acoustic guitar and adjust each according to the artists’ desires. 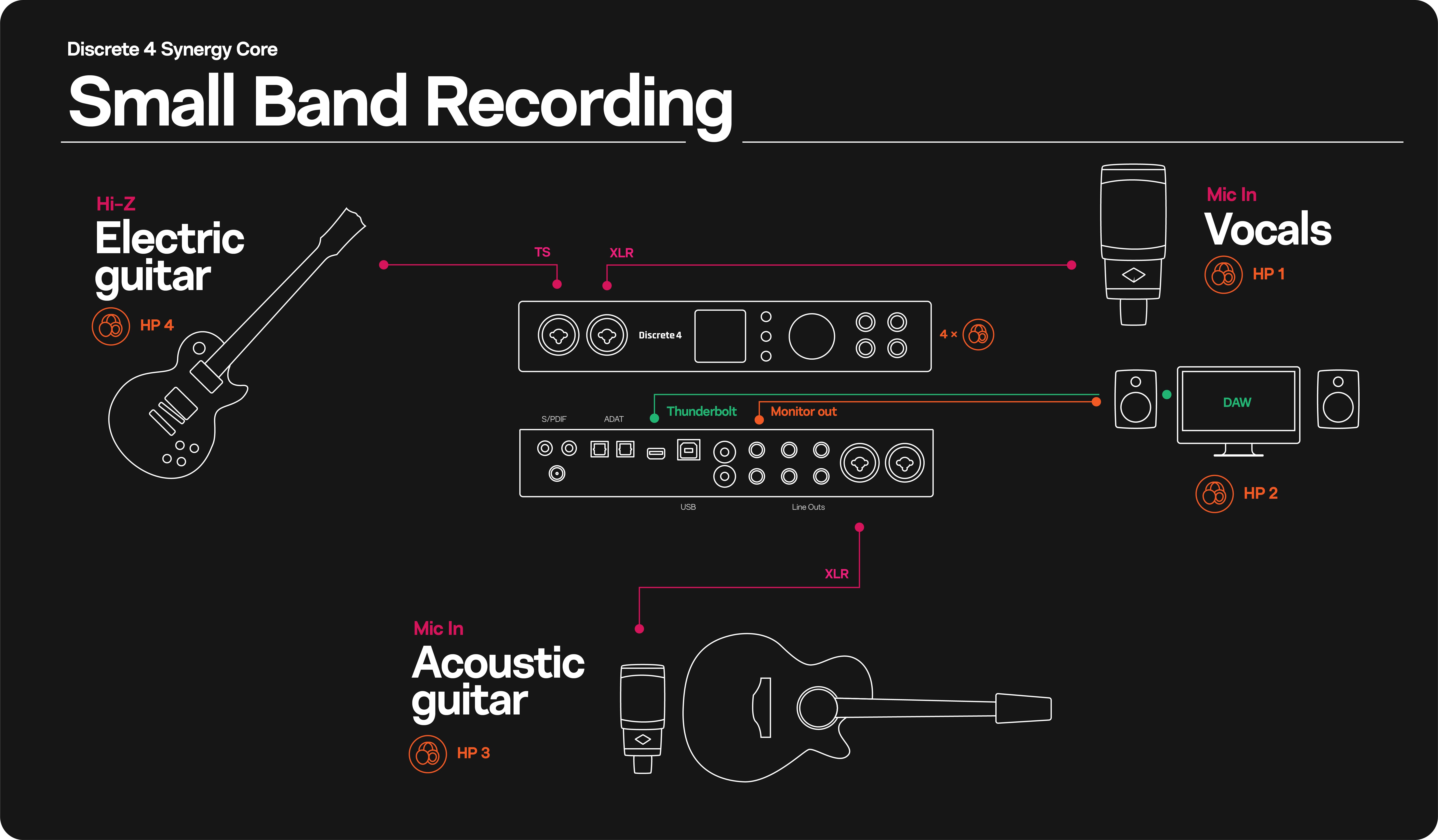 So far so good – the artists get to hear how they will sound in real-time as they play and without perceived latency, since everything is processed entirely inside the interface. There is one more input on the front available for microphone, line and Hi-Z level instruments – someone wanna join the party?

It’s recording day! You have gathered the whole band, everyone has brought their instruments and the versatile Discrete 4 Synergy Core sits beside you. To add more preamps to the setup, use the ADAT and its eight channels of expansion – just enough for an external digital preamp. This should come in handy to mic the drum kit. With the word clock output on the device, you can synchronize any external gear and provide stable 64-bit AFC™ clocking for the whole setup. 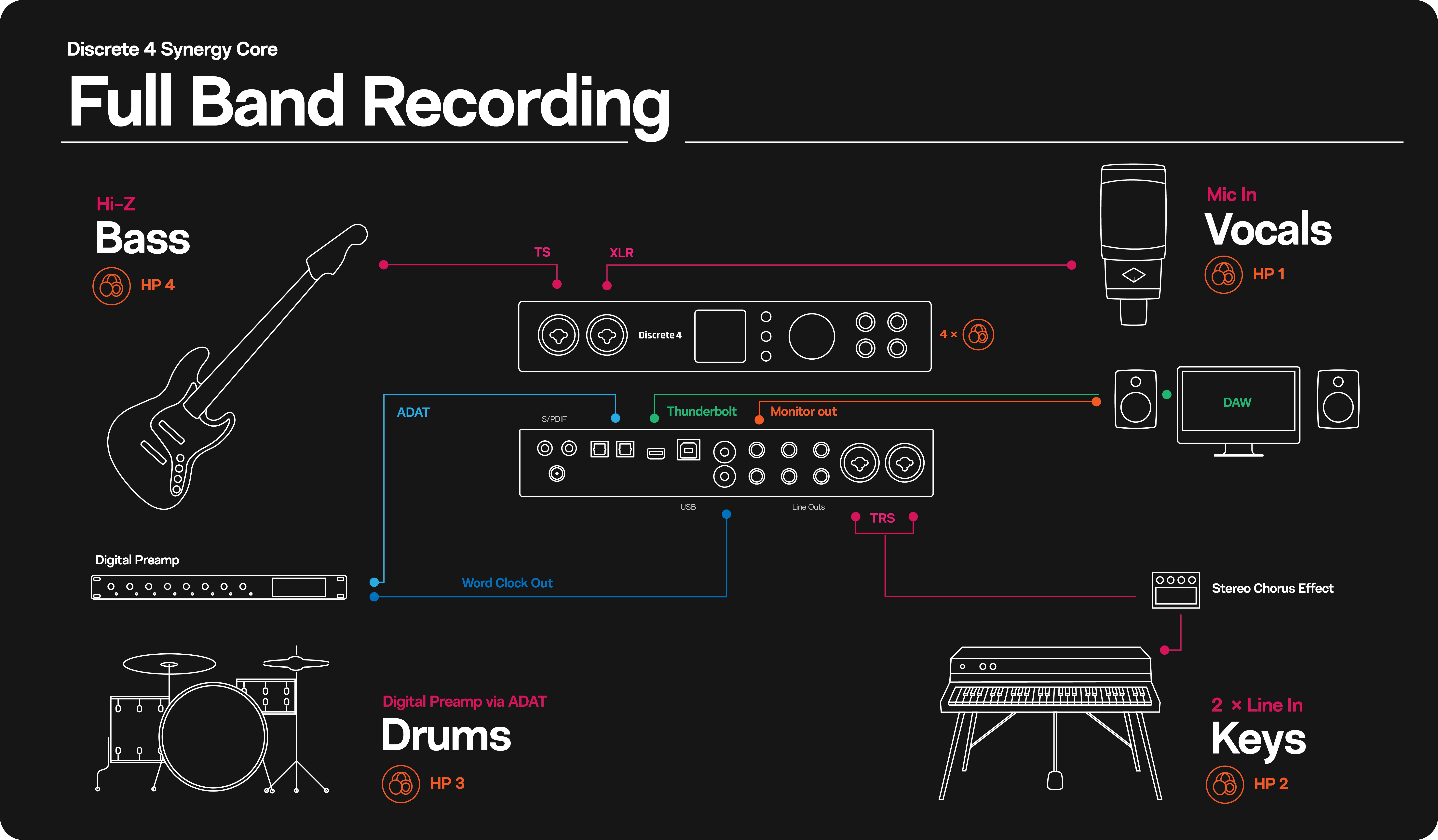 For monitoring, four independent cue mixes with effects are distributed to the band members via the four headphone outputs. The interface’s flexible routing allows you to switch audio sources per channel and configure parallel processing – record both wet and dry simultaneously. Since you have a larger band, in this scenario you can get closer to the maximum 32 effect instances loaded simultaneously in a session, without putting any load on the host CPU. While with studio hardware you normally have one compressor of a kind, with Synergy Core you can launch multiple instances of the same effect. The stereo monitor output is utilized in the control room and the band is ready to jam. Once your recording session is complete, you can move to mixing in your DAW by using the effects as hardware inserts and then stem master in-the-box, again using Synergy Core effects.

If your workflow includes tracking a live event while streaming, the S/PDIF digital port can be utilized to connect to secondary computer for redundancy. In this setup, the ADAT can establish the connection to the FOH (Front of House) mixing console. 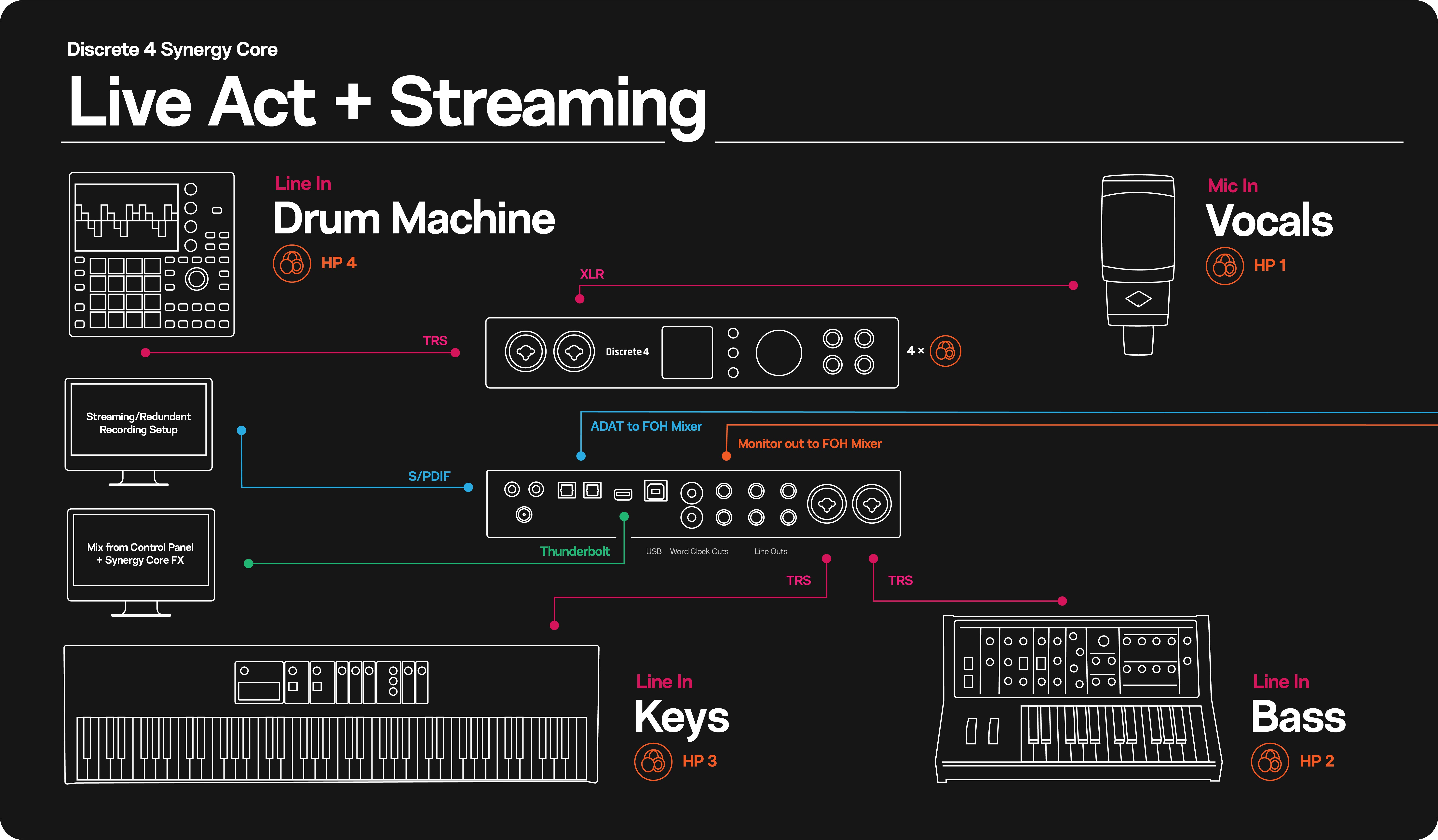 Find out more about the Discrete 4 Synergy Core here and check out available offers for the interface.